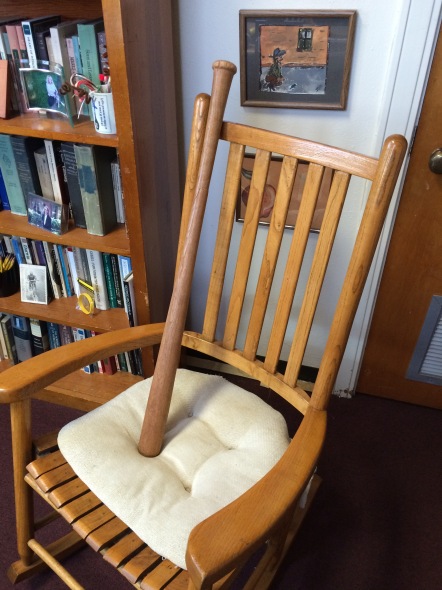 I found the bat in the dumpster behind our house. It could have belonged to Shoeless Joe Jackson or Fred Snodgrass or Sam Crawford. I was certain the bat had been left for me. I took it to Hardin-Simmons to show John Peslak. Since the start of the fall semester, John and I had been meeting, noontime, at the jogging track and intramural fields. I would bring a fungo bat and a sack of baseballs, and we brought our gloves resurrected from boxes labeled, taped, and stored in the garage. Hand-rubbed with Neetsfoot Oil, the twenty-year-old leather turned as supple as we believed we were. Still young. Young enough to track down a fly ball hit deep in the gap, glove arm extended, making the backhand snag look easy. Young enough to sprint for the Texas Leaguer and make the basket catch and still in stride, fire the ball to second, doubling up the runner, then jogging in to thunderous applause.

John said yes the bat might be from the Dead Ball Era. The wood was rough, a reddish-brown tint, no label, the barrel only slightly thicker than the handle. “Of course it is,” I told him. Then I showed him a copy of a 1914 photo from the library’s history archive—President J. D. Sandefer standing at home plate during a faculty vs. trustees baseball game. He was holding my bat. John agreed it could be a find, a treasure.

John extended his arms, palms and fingers thrust up in refusal. “No!” he said. “I’m not going to be the one who breaks this bat.”

“It’s not going to break,” I told him. “Feel how solid it is. This is the real thing; this is ash wood, boned and seasoned with the sweat and oil from who knows what famous ballplayers.”

“Okay, then you pitch to me. There’s no way this bat will break.” John stepped off 60 feet, 6 inches and lobbed a ball across the plate. “Come on, throw it like you mean it. Show me the stuff you claim you had in high school.”

John had grown up in New Jersey, he and his brother lying to their mother Saturdays when the Yankees were in town. They took the train and subway to the Bronx to watch a game from the outfield bleachers and be back home before their mother worried. “How was the movie?” she would ask. His junior year in high school, John was a star pitcher and centerfielder, good enough to attract a Yankees scout. Everyone was certain John would be signed at the end of his senior season. Except he broke his leg the first game. He went to college instead and came to Hardin-Simmons the year after I arrived. He had a Ph.D. in chemistry. He taught courses in chemistry, physics, astronomy. He kept a hardback copy of Walt Whitman’s Leaves of Grass on his desk. He was a professional nature photographer. He took up painting and ceramics. He would spend summers in a cabin alone in the mountains west of Buena Vista, Colorado. The cabin had no running water or electricity. He hiked the mountains. He knew everything about the Yankees through the 1960s. He knew everything.

“Come on, rag arm, throw the heater. I want it down the middle.” I swung level, my eyes and head locked on the ball. The wood was true. I drove the pitch into left field. “See! I told you. They don’t make them like this anymore.”

Just one more pitch. I would stop after one more rip. John asked me not to risk it. “What risk?” I said. “You saw that line drive. How many opportunities do you get to swing Shoeless Joe’s bat? Come on; bring it.”

John said, “Okay, one more pitch, but if you swing and miss, that’s all.” He thought he could throw it past me. I swung, hips and shoulders rotating into the pitch, head and eyes steady. When the barrel met the ball, we both knew what that sound meant.

Two weeks later, after hitting a few lackadaisical fungoes to each other, we were dressing in the locker room, and John asked me what I thought about this swelling on his thigh. He had noticed it the night before. I wanted to say, “It’s nothing. You worry about everything,” but I had a cracked bat leaning against the bookshelf in my office. I didn’t know what to say. “Maybe you should have it checked out.” He said he would. He did. That was the end of our noontime baseball.