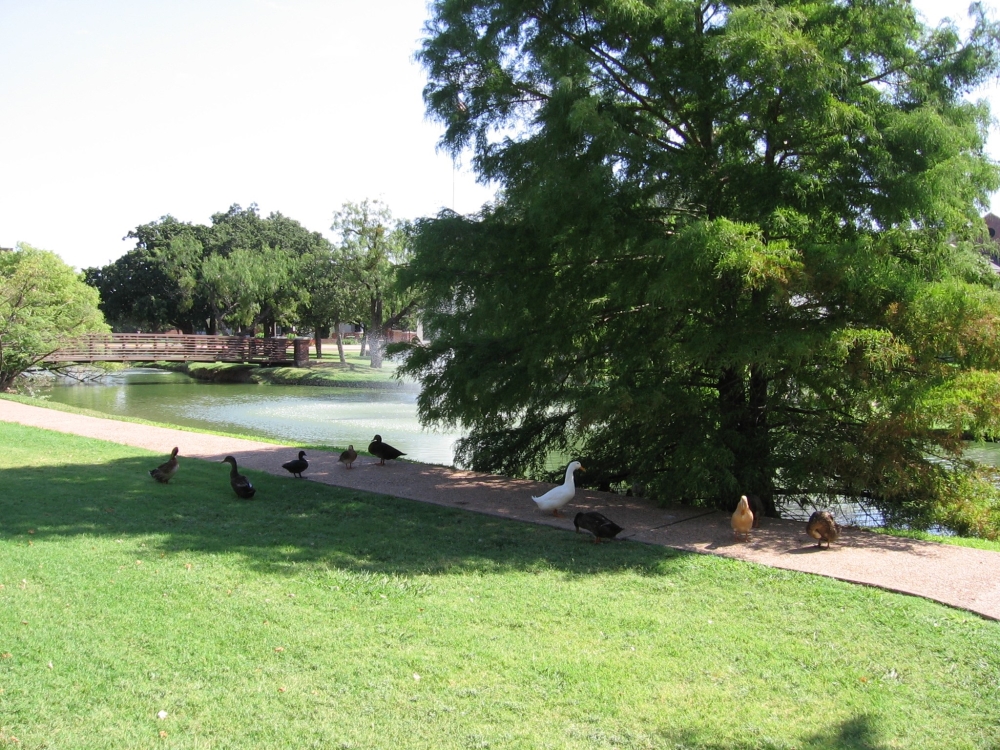 “The land was ours before we were the land’s. . . .
Such as we were we gave ourselves outright . . .
To the land vaguely realizing westward,
But still unstoried, artless, unenhanced,
Such as she was, such as she would become.”

“Here are your waters and your watering place.
Drink and be whole again beyond confusion.”

Hardin-Simmons University was, and continues to be, an act of faith. Abilene was seven years old in 1888 when “Henry Sayles, a well-known Abilene lawyer, suggested that Baptists found a school or college in Abilene” (Richardson, Famous 18). Two years later, the Sweetwater Baptist Association (extending west to El Paso) met to adopt a resolution to build the school, what the Association considered “a necessity” (Famous 18). In his 1964 personal history of Hardin-Simmons, Famous Are Thy Halls: Hardin-Simmons University as I Have Known It, With Autobiographical Sketches, Dr. Rupert Norval Richardson notes that from its inception, the university met with opposition. Rufus C. Burleson, president of Baylor University, was present at the Association’s meeting and spoke sharply against the resolution: 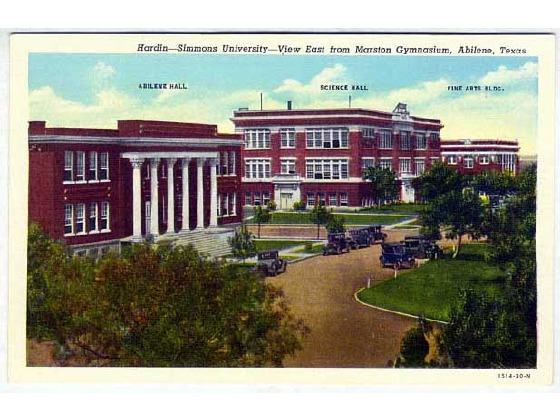 Baptists were not supporting the schools they had already, he argued. Then why dilute the strength of the denomination still further by establishing a school in a raw new country, with relatively few people and but little wealth to support it? The group heard him to the end courteously, ignored his sensible argument, and proceeded with dispatch. A committee was appointed with plenary power to establish the school. (Famous 18)

Nothing would come easy for the new college. The $5,000 and sixteen acres of land offered to begin building the school two miles north of the Abilene depot was not readily forthcoming when needed. “The building would cost $12,000 and more, and it became imperative that more money be raised. But where? From whom?” (Famous 19). 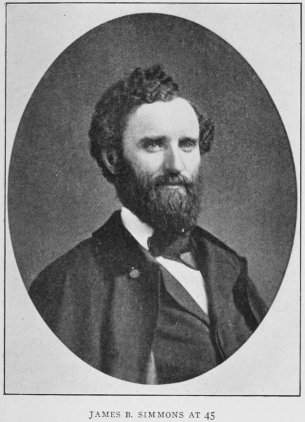 Providentially, Dr. George W. Smith and Dr. Owen C. Pope appealed to Dr. James B. Simmons, a New York Baptist preacher (Famous19). Dr. Simmons gave “$5,000 to aid in finishing the building,” and provided other sums “aggregating about seven thousand dollars in addition to the first large gift, and by will left his entire estate to the college” (Famous 19). Ask and you will receive. And if not, ask again and again.

The years 1931 to 1935 seemed the worst of times for Simmons University. By the school year 1932-33, the faculty’s salaries had been reduced by forty percent, and the university was able to pay only five months of the nine-month salaries (Famous 140). The university’s trustees suffered along with the faculty:

At that time [1933] the charter of the institution forbade indebtedness, and members of the board of trustees had gone their limit by endorsing college notes for which they were personally liable. Some of them were in a desperate struggle to save their own businesses; and even though they signed jointly, ten or a dozen of them, making the college notes prime security, every note signed reduced the bank credit of every signer by the total amount of the note. Truly these were the times that tried the souls of the Simmons trustees; and they passed the supreme test of loyalty when they continued to stay on the board even though it was hurting their own credit and preventing their borrowing money that they needed in their own business. (Famous 140)

With “high courage and devotion most of the employees accepted the situation, took their share of the income, and loyally stayed on” (Famous 140).

These Great Depression years were a particularly dark time for Dr. Richardson who, along with his teaching responsibilities, had assumed many administrative duties, becoming Executive Vice President (Famous 180) of the university in 1928, taking on “a large share of responsibility for the affairs of the university” (Famous 177):

The depression mind, that is the determination of people in comfortable circumstances to hold on to their money and property, was much in evidence. It seemed that everybody wanted either a job or a scholarship, or both. If I ever had doubts about the future of Simmons, even its ability to survive, it was during those years. The expression “prosperity is just around the corner” became a trite, sorry joke. “Prosperity is around the corner all right,” said Will Rogers, “but you’re not going to reach the corner.” Truly it seemed that we would never reach the corner; the depression hung on like a miasma. (Famous 141)

Dr. Richardson notes that the “debt increased each year and borrowing became a hand to mouth business. When the banks of Abilene became saturated with Simmons paper, borrowing was extended to Breckenridge, Dallas, Winters, and other points. In all cases the trustees signed and thus gave their own personal security” (Famous 142). Borrowing continued—to meet the interest payment on a note, to “finish out” a month’s payroll, but “where would next month’s payroll come from? The total debt in the early 1930’s aggregated about $300,000” (Famous 142). As a result, the “charter was changed, permitting the university to incur debt, and the obligations carried by the trustees were shifted to the endowment fund. This was better for both the institution and the trustees” (Famous 142).

Writing about the years 1934-1937, Dr. Richardson says it was “gratifying . . . that in spite of all straits through which it passed, the university never defaulted or failed to meet in full a single obligation to any person on the outside. It was the ‘family’ that suffered, this is the faculty and staff who lived for several years on half pay” (Famous 144). The question remained—how to save the university:

“More than one good and influential friend during those years suggested that the only honest and honorable thing to do was to pay the debts out of university endowment, use the remainder of the money to operate in creditable fashion, and when these assets were exhausted to discontinue Simmons University and turn its plant over to Abilene public schools” (Famous 144).

Dr. Richardson is quick to declare that President J. D. Sandefer “never seriously considered such proposals. ‘We must have faith in these times and never surrender,’ he would say. If he had a credo, it was This Too Will Pass” (Richardson, This 53). For Dr. Richardson, President Sandefer was the university’s shining light, guiding Hardin-Simmons

for thirty-one years through achievement and disappointment, expansion and recession, prosperity and depression, victory and defeat. . . . His courage and innate optimism never failed. No matter how difficult the way became he always looked forward to smoother paths ahead and went on with unfailing energy. So many times, I recall, when I grew discouraged, he would say, “Rupert, you must have faith.” And his own faith was a strong sure light for those who traveled with him. (Famous 175)

J. D. Sandefer was a great president, Dr. Richardson states, because he was a great man: “The fact must not be overlooked that college presidencies seem high and honorable because great men have made them so. No position, no matter how exalted, ever made a little man great” (Famous 176). The years 1934-1937 proved a relentless test of the mettle of President Sandefer, Dr. Richardson, the Simmons faculty and staff, and the university’s trustees.

As the Depression deepened, Simmons was desperate to secure a benefactor. It appeared that Mr. John G. Hardin of Burkburnett might be that savior, but he preferred other universities to Simmons, and the small gifts he made to the university brought with them conditions, including requiring the university to pay commissions to Mr. Hardin’s representatives in the negotiations (Famous 150-51). Dr. Richardson explains that, along with struggling to meet this seemingly unfair stipulation,

Simmons University, whose employees had been receiving half pay, or a little better for two years and pitiably poor salaries during the last year and a half, would have to raise money to secure endowment, the income from which would pay salaries at some time in the future. In the words of the radical labor agitators, this was, in truth, nothing now, worse that nothing, but “pie in the sky by and by.” In addition to the premium money which would have to be raised, the university would have to honor several dozen scholarships, aggregating many thousands of dollars. Still, when the opportunity came through at last, the faculty joined with the trustees and the bonus was raised. (Famous 151)

From the “vantage point of thirty years after,” Dr. Richardson asked himself why “did we do that” (Famous 151), why

did the faculty not only stay on but join in a cause that was squarely against their own financial interests for the time being? It was loyalty, to be sure, but it was more than loyalty; it was confidence in the future of the institution. The hour had struck for Simmons; this was her great opportunity and we were determined not to fail her at such a time. . . . Yes, there was something magnificent about these years; while the United States government and millions of its people were borrowing money and taxing the future, Simmons was raising money for the benefit of the future.    (Famous 151-52)

And yet, after all this, it appeared that the only hope of possibly receiving a large financial gift from Mr. Hardin and his estate was to add the name of Hardin to the university’s institution. There was much opposition: “The name of the institution was not for sale” (Famous 155). Dr. Richardson notes that university officials met repeatedly “by night and by day” (Famous 155). President J. D. Sandefer “suggested that if the voice of James B. Simmons could reach from the great beyond, we would hear: ‘Change the name if it will insure the perpetuation of the institution, if need be, leave out the name of Simmons.’ It was an hour filled with emotion and there were not a few tears” (Famous 156). Changing the name did result eventually in a gift of $900,000 from the Hardin fortune (Famous 156), in effect saving the university, for the time being.

From its beginnings, Hardin-Simmons has prevailed thanks to servant-leaders like James B. Simmons, Julius Olsen, J. D. Sandefer, Jesse Fletcher, a heritage of courageous visionaries whose hard-wrought faith and determination forged a bond that has sustained the university, its “noble cause,” for 128 years, a legacy of liberal education—the liberal arts, the fine arts, the sciences and education, theology and business, disciplines working together equipping students to think for themselves, question and take action to better our world, its people and resources, disciplines working together for a righteous, common goal—education sowing faith to counter doubt, offering hope in place of despair, a light to shed the darkness. This is what defines HSU, what makes it unique, what James B. Simmons envisioned for our university—a beacon of faith and courage, a heritage forged through adversity overcome.

“Here are your waters and your watering place.
Drink and be whole again beyond confusion.” 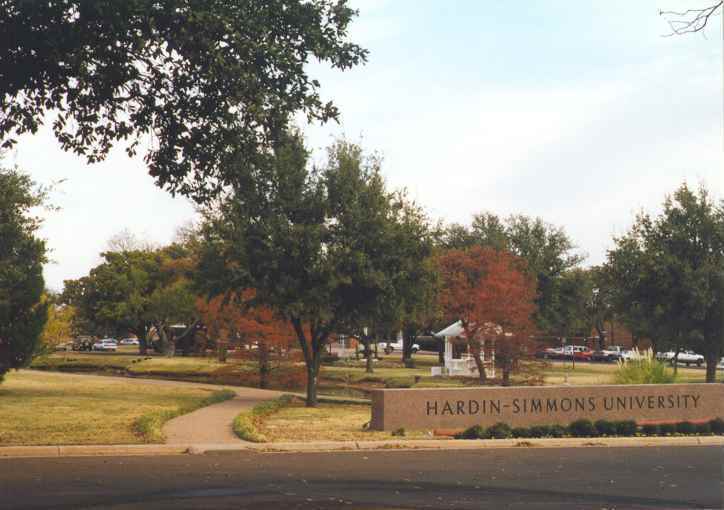 * “Great Are Thy Victories” is a line from the Hardin-Simmons anthem:

Hardin-Simmons, hail to thee,
for famous are thy halls.
Long may thy worth increase.
Long live thy noble cause.
Great are thy victories
o’er land and over sea.
Fair daughter of the West,
we love and honor thee.

Richardson, Rupert Norval. Famous Are Thy Halls: Hardin-Simmons University as I Have Known It, With Autobiographical Sketches. Abilene Printing & Stationery Co., 1964.