The sages table at McKay’s Bakery on South 14th was already masticating the topic of the morning when I walked in to pick up a dozen harvest muffins. This is what I heard: “There are more chickens in the world than dogs and cats and goats and. . . . ”

So I’m thinking maybe that’s because not all chickens run around headless, decrying their cooped condition. The Scientific American for February 1, 2014, reports that a chicken “possesses communication skills on par with those of some primates and that it uses sophisticated signals to convey its intentions. When making decisions, the chicken takes into account its own prior experience and knowledge surrounding the situation. It can solve complex problems and empathizes with individuals that are in danger.” A coop could become a co-op, a collective—creative, courageous, contagious.

Doesn’t the cliché “Thinking Outside The Box” imply we are all in the box? Don’t we have to be in before we can think ourselves out? Cooped, boxed, doesn’t have to mean we don’t have choices. The Existential Chicken. 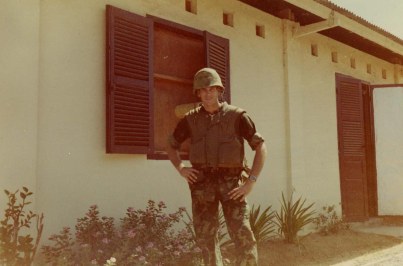 College matriculation offered my generation deferment from Viet Nam, at least for four years. And afterwards there were further options—Canada, or incarceration, or the call to seminary (usually Baptist), or, for some, the Marine Corps.

The Marines taught me that esprit de corps means more than Webster’s definition: “the common spirit existing in the members of a group and inspiring enthusiasm, devotion, and strong regard for the honor of the group.” Yes, it means that, but Marines are taught it also means you take care of your own, never asking of your fellow Marines what you have not done, what you would not do, yourself. I experienced this for three years. I came to expect it. Back in the world, I was often disappointed.

You know why the chicken crossed the road. Some clichés are worth repeating: “When the going gets tough, the tough get going.” Semper Fi. All of us together in the fray.