I’m taking it as a sign . . . a mission . . . probably not from God. It could be a sign. Maybe from Dr. Richardson? I’m calling him Rupert; he did fly straight to Dr. Richardson’s Famous Are Thy Halls, and he only let go after I offered him my Richardson-look-alike fedora, then hustled him down the stairs to the shrubs in front of Abilene Hall.

Probably not a sign. Not a mission. But it must mean something. A bat landing on your shoulder in the doorway of your third-floor office, then gliding to the floor, lifting off to bank around your desk, sonar in on your bookshelf, and cling to the first edition of Famous Are Thy Halls must mean. . . .

I confess I’ve been blue. Not depressed; that takes too long. Blue is nostalgic, maudlin, lying on the couch with a bowl of Blue Bell Light Homemade Vanilla Ice Cream and a few squares of dark chocolate, sometimes what’s left of a sack of free-refill Century 12 movie popcorn, a Billie Holiday cd for a little mood music. Depressed is a fifty-pound, hyper Australian shepherd dog, muzzle resting on my chest, insisting on shared ice cream, dark chocolate, and popcorn. (She doesn’t get the chocolate.)

I’ve never been one for going home again, but I’m blue for Hardin-Simmons. By that I mean the good ole days—you know, back with those friends you laughed with, shared lies with, watched your children grow up with, sang “Long live thy noble cause” with and believed it. Colleagues who gave themselves to Hardin-Simmons, its heritage handed down from James B. Simmons, Julius Olsen, J. D. Sandefer, Rupert Richardson, Jesse Fletcher. Blue is missing Jack Dean, Ira Taylor, Lawrence Clayton, John Peslak, Ken Jacobs, B. W. Aston, Terry Minami. Blue is watching friends depart over the years, especially since I never intended to stay, then stayed. I know why.

When my marathon-training and running partner Jack Weir left for Morehead State University, I tapered off from marathons. After I lost my running buddy Wrangler, I turned to race walking, decided I might as well try to save what was left of my knees, think about the long haul. That was depression. Lucy brought me back . . . to running . . . every morning at 6:30, insisting I close my writing notebook, finish my cup of coffee, get the sport harness and leash . . . be ready to run. Who needs the long haul? Running hard with Lucy is good. Jogging at noon with Jason King, and not often enough with Rob Fink, is good. Good conversation. For three to four miles, I’m thirty again, just starting out, Camelot on the horizon. I’m taking it as a sign . . . a mission . . . 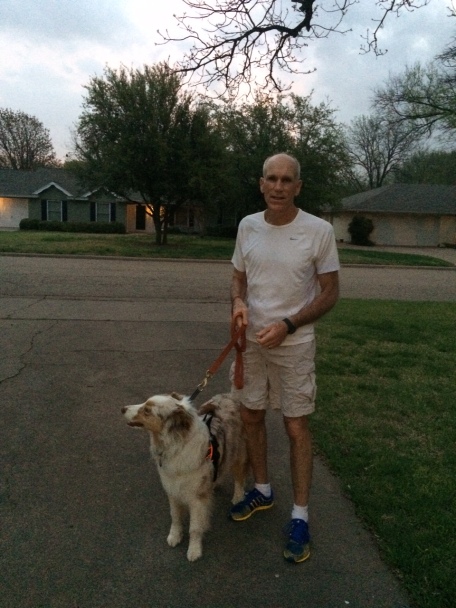 Richardson, Rupert N. Famous Are Thy Halls: Hardin-Simmons As I Have Known It. Abilene Printing & Stationery, 1964.