“We must work the works of him who sent me while it is day; night is coming, when no one can work. As long as I am in the world, I am the light of the world.” 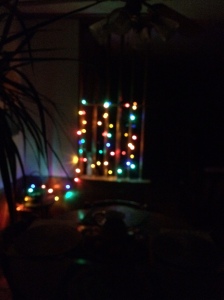 “It is the light of course,” Ernest Hemingway’s older waiter explains in “A Clean, Well-Lighted Place.” He is “‘of those who do not want to go to bed. With all those who need a light for the night.’” A string of red, blue, yellow, green, and orange LED Christmas lights blesses our night, more than a path from bedroom, to den, to kitchen at 4:00 a.m., some mornings (like today) 3:00 a.m. A reminder of the season it might be upon waking unsure of what day, sure only it is the early dark with a vestige of Christmas, the quiet colors of joy.

Strong, dark coffee helps and three or four squares of dark chocolate, a large Moleskine notebook, sharpened #3 Ticonderoga pencils, the phantom weight of Wrangler’s muzzle resting across my sandaled feet. It’s been a year without Wrangler, and I’m no better. Lucy is almost a year old, loving and needy, the most beautiful Australian shepherd dog of all our previous Aussies, Katrina’s pal. Lucy is not Wrangler. Get over it! I tell myself.

You understand. It’s not the dog. It’s all those losses we aren’t permitted to weep for, no wailing wall for friends who asked, “What do you think this blood bruise means?” Those who lay them down to sleep and woke to what we will, one day, wake to. Who thought how strange I cannot button this button, extend this arm above my head, complete a coherent sentence. Who tenured their resignations, cachet’d in their chips. Who walked unafraid until the diagnosis, who fell and rose again, fell and rose again, fell and. . . . Dylan Thomas understood: “Rage, rage against the dying of the light.”

There are many deaths, the worst not having lived. I turn again to Henry David Thoreau who “went to the woods because [he] wished to live deliberately, to front only the essential facts of life, and see if [he] could not learn what it had to teach, and not, when [he] came to die, discover that [he] had not lived.” Is not having lived settling into a Moleskine notebook, a pencil, like satire, the weapon the powerless brandish against the bully hooded in black, his curved blade a scything pendulum, no respecter of prophets or poets, professors cupping a candle’s flame against that chilling wind blowing where it will, huffing and puffing.

I love the apostle John’s gospel of light against darkness, Jesus against those certain to death, who see but do not see, comprehending not. That’s me. Would that I were the man born blind who answered his inquisitors, “Whether he is a sinner I do not know. One thing I do know, that though I was blind, now I see”; the one out of ten lepers who returned to say thank you; the woman standing, eyes cast down, before her savior writing forgiveness in the dirt; Mary, who with her tears, bathed Jesus’s feet, anointing them with the costliest oil, wiping them with her hair; the thief dying on his cross, who confessed he was justly condemned, “but this man has done nothing wrong,” and asked Jesus for remembrance.

For now, I can offer my gratitude to you who save the oil and fill the lamps like Frost’s old man against the winter’s night—“a quiet light, and then not even that.”

Thoreau, Henry David. “Where I Lived, and What I Lived For.” Walden and Other Writings, edited by William Howarth, Modern Library, 1981, pp. 73-89.