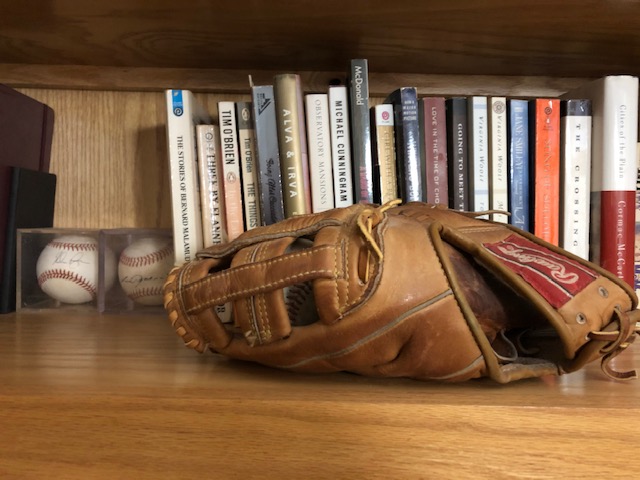 “One hoped not so much
to be the best who ever played
as simply to stay in the game
and ride it wherever it would go,
culling its rhythms and realizing its promises.”

I never imagined I would not be able to throw a baseball. Overhand. Without grabbing my shoulder and trying not to scream. Yes, overly dramatic, but true. Both rotator cuffs torn. Shoulder sockets grinding bone.

I never imagined retirement. Never considered the possibility. I always told my college students: Choose what you love; then do it. I did. I love literature–poetry, novels, short fiction, literary nonfiction–reading it, writing poetry and prose, discussing it with students and colleagues. Forty-two years sharing this love. And then it was over. My choice. It was time. A new time, what A. Bartlett Giamatti calls Leisure Time–“not-work, retirement” (20).

Giamatti says everyone “recognizes the face of work” (20): “It is the face you turn to the sun every day, or to its surrogate, the clock, so as to mark the passage of one’s mortality and thereby also affirm that one is vital still” (20). Retirees, Giamatti declares, often find “retirement to be idleness, not freedom” (21)–“an inactive tedium, a state of inertia–a form of death” (21).

Leisure, on the other hand, “is precisely choice, the use of free time. It is not passive, or merely private; it is not idle or inert” (21). Leisure “is that form of non-work activity felt to be chosen, not imposed” (21-22). It is “a form of freedom and is about making free choices” (22).

It is, “in Christian terms, a moment of contemplation. It is an instant of insight which is the result of freedom fulfilled, a state of coherence achieved with no coercion. Contemplation is the result not of work but of an activity freely assumed whose goal is to so perfect the self that for a moment we see what lies beyond the self–not as in an abyss, dark as night, but as in a radiance, bright as life.” (22-23)

I should pause here to acknowledge that each of the above quoted statements is from Bart Giamatti’s book: Take Time For Paradise: Americans And Their Games (Summit Books, 1989), and Giamatti’s (and my) preferred game is baseball–The Boston Red Sox for Bart; The New York Yankees of Mickey Mantle for me.

Another of his baseball books is A Great And Glorious Game: Baseball Writings of A. Bartlett Giamatti, edited by Kenneth S. Robson with a foreword by David Halberstam (Algonquin Books of Chapel Hill, 1998). You may remember Giamatti as the president of baseball’s National League and later as Commissioner of Baseball. As much as I love his baseball writings, to me his most important book is A Free And Ordered Space: The Real World of the University (W. W. Norton, 1990, the first copyright date–1976). I have quoted from this book so often in talks and in essays, sometimes I feel as if I have written it. Would that I had.

As you can see, I’ve already let this website Post get away from me, the University literature and creative writing professor just waiting for an opportunity to rise from the retirement ashes. Giamatti believed in the necessity of the humanities as much as (maybe more than) he did in the poetry of baseball. Of course baseball (still, I believe, America’s Game) is not under assault these days on college campuses the way the humanities, the arts, and theology are by forces trumpeting what could be their rendition of Norman Whitfield’s and Barrett Strong’s June 1970 song War, recorded by Edwin Starr, with its famous refrain: “(War, huh) Yeah! / (What is it good for?) Absolutely nothing, uhuh.” The revised refrain would have to substitute “humanities, arts, theology” in place of “War.” I’m praying it won’t catch on, won’t make the Billboard charts.

Maybe you will indulge my quoting the following somewhat-long passage from Part One–“The Academic Mission”–in A Free And Ordered Space. Giamatti is differentiating between Management and Leadership. As president of Yale, he observed that universities (and other institutions) “while being competently managed in most cases, are not necessarily themselves being led” (36):

“A college or university is an institution where financial incentives to excellence are absent, where the product line is not a unit or an object but rather a value-laden and life-long process; where the goal of the enterprise is not growth or market share but intellectual excellence; not profit or proprietary rights but the free good of knowledge; not efficiency of operation but equity of treatment; not increased productivity in economic terms but increased intensity of thinking about who we are and how we live and about the world around us. In such an institution, leadership is much more a rhetorical than a fiscal or ‘strategic’ act. While never denigrating the day-to-day, never scorning the legitimate and difficult chores of management, never pretending that efficiency is useless or productivity irrelevant, leadership in such an institution must define institutional shape, that is, define its standards and purposes–define the coherent, sustainable, daring, shared effort of learning that will increase a given community’s freedom, intellectual excellence, human dignity.” (36-37)

This is why I love Bart Giamatti, why for most of my forty-two years in the University, I did not consider my work to be a “daily bargaining . . . on behalf of staving off the end of existence” (Take Time For Paradise, 21). I feared retirement might bring about that end.

“But when the birds are gone, and their warm fields
Return no more, where, then, is paradise?”

I wish you could know a life’s work with colleagues and students like I called friends. I knew I would not be idle in retirement. I would choose leisure time or, as it happened, allow it to choose me. If you have read some of my previous Posts, you know how important my friends at City Light Community Ministries have become for me, my volunteering for approximately three hours at noontime Monday, Wednesday, and Friday each week, a blessing.

And even though I can’t throw a fastball to my grandsons, I can attend to their sports and musical performances. And there are always books and Katrina. And Lucy.

So here’s where I’ve been heading from the opening sentence, needing to try and explain why, with my son Jon’s expertise, I redesigned, rather than deleted, my website last summer, agreeing to try writing some Posts. Now, I can see these Posts are what Giamatti called for–my active choices in retirement, choosing leisure, not inertia, the Posts being the surprise I never saw coming. So, after this paragraph, I’m through apologizing for writing Posts. Yes, they are self-publications. I don’t care. Last year and forty-two years prior, I would have broken in half all my Blackwing 602 pencils and taken up golf. Now, at 4:00 a.m., I write where the spirit leads me. Sometimes even the holy spirit. A handful of readers follow the Posts, and I appreciate it. I think of my postings not so much as letters, as a backyard game of pitch–now slow and underhand.

“no more the heat of the sun” *
William Shakespeare

Now, my local pub of chums
fading as photographs

curling in the sun,
our palsied good hand

lifting a pint to
the Minor Poets Guild

of versifiers gathered
on street corners,

a penny for a poem,
the sea tepid and smooth

as a lake, a calm swell,
and not even that,

our names sibilant,
soft on the tongue.